Information and facts about the mexican state of Quintana Roo

A legal claim on health care and social insurance benefits have 522673 citizens of Quintana Roo.

In Quintana Roo about 257325 households are registered.

233509 of the normal households have sanitary installations, 231534 are connected to the public water supply, 240160 have access to electricity.

The economic situation allows 47916 households to own a computer, 172133 own a washing machine and 224363 households are equipped with one ore more televisions.

School and education in Quintana Roo

42407 inhabitants of the population of 15 years and older did not visit a school and 222731 persons did not finish the school. 174931 visited only the 6 years lasting primary school, 226602 visited and finished the college or similar scholar institutions.

A total of 67693 aged 15 to 24 years visited a school, the medium time school is visited through the whole population is 8 years.

Municipalities in the state of Quintana Roo in Mexico

Add a reference to Quintana Roo 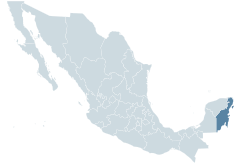